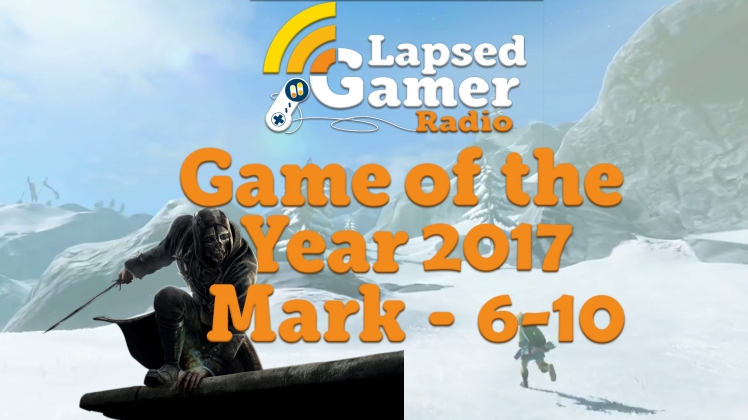 2017 has been an absolutely stellar year for video games. I played so many cracking titles that drawing up a list of just 10 was incredibly difficult, and there are still so many acclaimed releases that I am yet to get round to. Apologies to Yakuza 0, Persona 5, Nier Automata etc, I never got to finish you in time. Apologies also to Night in the Woods, Thimbleweed Park, Cuphead, Pyre, and so many other games that I will try my best to get played in 2018. Anyway, with my top 5 games played in 2017 covered in our two-part GOTY episodes, here is my 10-6 list:

In recent years we have seen something of resurgence of classic adventure game that had seemed to die out with Lucasarts, and there have been some really interesting takes on the genre, but none have had as much of an impact on me as Night School Studio’s Oxenfree.

The premise is simple enough, a group of friends travel to a remote island for the local teenage traditional weekend party, and end up becoming enveloped in a ghost story. This would be enough to make it an interesting game, as the mystery of the supernatural element unravels in a thoroughly satisfying way. But what elevates Oxenfree above other adventure games is the dynamic between the characters and the way in which you interact with them. Tensions between the protagonist and her new step brother, and their companions, around a tragedy in their recent past play into the overarching mystery and cause some genuinely emotional moments.

What brings the interactions between the characters to life is an ingenious conversational system, that encourages the player to make quick choices from dialogue options (as per the Telltale Games model) before the options are removed. But instead of waiting for one character finish speaking before vocalising your dialogue choice, characters talk over each other and interrupt each other, leading to conversation threads being abruptly ended and characters trying to get back to their point, sometimes succeeding and sometimes giving up. This gives a game with multiple response choices natural and flowing dialogue that cements the relationships between the characters and makes the story reveals all the more impactful.

I have already written a full review of Puyo Puyo Tetris, so go here to see my full thoughts, but I shall do my best to summarise.

Puyo Puyo Tetris takes the competitive PvP version of Tetris, and combines it with the Japanese phenomenon of Puyo Puyo to create a frantic, frustrating, but unbelievably fun puzzle game where you race against up to 3 AI opponents or real life players to make combos and ruin your opponent’s boards. A lengthy campaign with one of the most ridiculous stories you could imagine, a plethora of different online and vs-AI modes, plus classic endless Tetris and Puyo Puyo variants mean there is more fun to be had here than in any Puyo Puyo or Tetris release to date. A must have for puzzle fans and people who like frantic couch multiplayer.

When the first Splatoon came out in 2015 it was a revelation. A brightly coloured, frantically fun competitive shooter with a sense of style unlike anything we’ve seen since the early 2000’s Sega era. But unfortunately, as a Wii U exclusive, not many people got to play it it due to the relative unpopularity of that console.

With the release of the Switch, the opportunity to open up the joy of 4v4 paint-based shenanigans to a whole new audience was there, but rather than simply port the game with a few extra bits (like Mario Kart 8 Deluxe), Nintendo EPD decided to do a full blown sequel. Some may argue that Splatoon 2 doesn’t iterate on the original enough to be classed as a proper sequel, but if it ain’t broke don’t fix it. Splatoon 2 is almost a perfect game, the only issues revolve around Nintendo’s archaic attitudes to party chat and playing games with your friends, but the fun of the multiplayer modes, plus the cracking single player campaign, and the co-operative horde mode of Salmon Run make up for the shortcomings.

Housemarque, the masters of the modern twin-stick shooter finally teamed up with genre legend Eugene Jarvis, and from this union one of the sharpest, fastest, most stylish, and most challenging twin-stick shooters ever made emerged. I lack the skill to put into words just how satisfying and addictive the gameplay loop of repeating the same series of levels over and over to get that high score is, but trust me, if you have ever enjoyed a twin-stick shooter this game will make you happy in a way few video games could.

Housemarque recently announced that they will no longer be making games in the genre that made them famous, due to the fact that sales of Nex Machina (and their other 2017 release Matterfall) were disappointing. This is a genuine shame because currently no studio makes arcade style games with the precision and panache that Housemarque have, so take the opportunity to play Nex Machina, you will not be disappointed.

When rumours emerged that one of the games coming to the new Nintendo console would be a crossover between Mario and the Ubisoft equivalent of the Minions, people rightfully began to worry. When news broke that the game would be developed, not by Nintendo themselves, but by Ubisoft, and images surfaced of Mario holding a gun, those worries turned to incredulous disbelief. Then, at the Ubisoft E3 conference we finally got to see Mario + Rabbids: Kingdom Battle, Shigeru Miyamoto spoke of how much he enjoyed the game, and Nintendo fans not only breathed a collective sigh of relief, people actually began to be excited for the game.

Mario + Rabbids: Kingdom Battle looks like baby’s first XCOM, but the colourful world of the Mushroom Kingdom and the antics of the Rabbids belie a competent and challenging turn-based strategy game, with an aggressive and intelligent AI and some brutally hard boss fights. A varied cast of characters with unique and useful tool sets make for a game that is faster paced than the XCOM reboots it is clearly cribbing from, but with almost the same level of deliberation and strategy required to succeed. By far, one of the most surprising games of the year.