As a child I always loved board games. I have fond memories of playing games such as Sorry, Pac-Man and Lost Valley of the Dinosaurs. I remember the games of Frustration, creating elation when I sent my Mum home, when she was so close to victory or despair when she did the same to me.
I was then introduced to the role-playing world with M.E.R.P (Middle-Earth Role-Playing and Dungeons and Dragons. The natural progression was then to pick up my sword and enter the war strewn worlds of Warhammer. After spending many a merry year killing and maiming, the group of friends I played with “grew up” and moved on with their lives. I put away the dice and games, like an old warrior who puts away his weapons, knowing maybe one day they might be needed again.
In the last couple of years, I started noticing strange new games appearing, and heard rumours that boardgames were going through a renaissance and so I decided to find out what was going on. I was shocked to see the change, in the themes, types and variety of new games available.  I started to buy games, (some are still shrink wrapped-I know it’s wrong) and have joined a couple of groups, and have enjoyed gaming immensely.
This year I decided to go to my first UK Games Expo. It fell fortunately in a half-term holiday, and I was able to stay one night. After hearing about some of the problems of last years show, from the excellent Gameburst podcast, I wasn’t sure what to expect, but was encouraged to hear that they had expanded into the NEC, rather than just using the Hilton hotel. The organizers had put trade into the NEC, along with the ‘bring and buy’ area, while the competitor events and evening festivities were held in the Hilton. I booked a hotel that was close (The Arden-recommended even if it is a short walk away from the NEC) and away I went.

I arrived on the Friday with the day starting on a positive; a two day parking pass for the cost of one-bargain!
It was the first time that I had been to the NEC, and it was a very pleasant place. It features a large lake, surrounded by hotels, numerous shops and places to eat.
I picked up my ticket, which was quick and efficient, however despite this efficiency the queues on Saturday looked long, and there was a wait.
I received a lanyard along with a very nice 64 page booklet, that had interesting articles, including one on the history of the Expo, but most importantly it featured a map, which is a must for any event.
There were quite a few people about, and I just wandered around, taking in the sights and orienteering myself. this was fairly easy, with the walkways being named and in a grid fashion.
I then made a beeline to the famous ‘bring and buy’ area. This is where people bring their own board games to sell at the Expo, with the Expo charging 10% of the sale price, which is given to one of the Expo’s chosen charities.
The line was short, but even this early the area was full with people searching for a bargain, or hunting for that game that had eluded them, before going out of print. I saw many games that I would have liked, but made a rookie mistake by not bringing enough cash, since that was the only method of making a purchase. So the only game that I could afford was The Great Fire of London 1666, a game I had been interested in due to my love of history.
I also learned that the area where new games are checked in and placed on shelves, was really busy with people just waiting, causing road blocks for others who just wanted to browse.  Of course I joined in,and added to the crush.It was fun seeing a lot of classic games, I wanted but missed out due to no cash (next time Heroquest and Space Crusade you’ll be mine!). 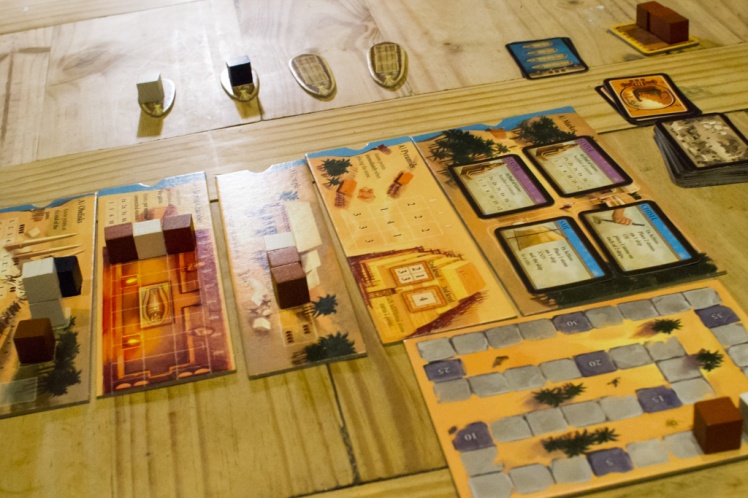