A long time ago (just over 5 yrs in fact) and what seems now, in a galaxy far, far away, EA announced the exclusive rights to publish Star Wars games, developed by DICE, Visceral and Bioware. There was hope for many that we would get great games, while others felt fear; that the corporate machinations would interfere with Star Wars scaling the video game heights. So where do we stand at the moment with Star Wars, and how did we get here?

At E3 2013 fans were happy to learn that Battlefront was to be developed by DICE, developers of the Battlefield series. EA had listened to DICE, and made the decision to allow proven developers to play in the Star Wars universe, and with a title that many gamers loved. It should have been a massive critical hit, and in some ways it was. It sold 14 million copies to retailers, and achieved praise for the graphics and sound design. In addition a VR level was released, where you flew an X-Wing and was given away free, to great fan and critical reception. It’s still used to highlight the benefits of VR.

However, there were grumblings. EA had decided to remove the single player element from the game, so that the game could be released alongside The Force Awakens. There were also concerns about the lack of modes and the simplistic nature of the gameplay.

Battlefront burned like a flare, brightly at first, but had little content to keep gamers coming back and numbers dwindled throughout 2016. The shelves of CEX were slowly collapsing due to the amount of copies they had, but EA counted it as a success.

EA had also announced in 2014 that Visceral, famed developers of the Dead Space franchise, were working on a single player “uncharted” like adventure game, with Amy Hennig, who had worked on the Uncharted series.

Star Wars Uncharted! A gamer’s dream; getting Amy Henning, a respected writer, and then Jade Raymond hired; there was hope for Star Wars fans. Could this game bring balance to the force? I’ll get to that later.

What about Bioware I hear you cry? Well they worked on The Old Republic, which is an MMO. It was well supported at first, however, early this year it was rumoured that Bioware had moved assets away from the game to Anthem, and with the last expansion released in 2016, it doesn’t feel like this game will continue for much longer.

Battlefront 2 was announced in 2016, to trumpets of including a single player campaign, no season pass (because it fractured the player base of the first one), and a new expansion system that would keep players playing longer. EA were still holding all the cards for a win, showing Star Wars fans, that they did really care. A strong single player aligned with a strong multiplayer would mean fan acclamation, and to silence the doubters.

Did it happen? Well suffice to say the backlash to Battlefront 2 was so big that, not only did it not meet its sales targets (still sold 9 million units), had the progression system deactivated, and then ripped out of it. It also sent microtransactions back to the stone age. It caused such a big stink that Governments started to examine microtransactions and these ramifications are still reverberating around the world. 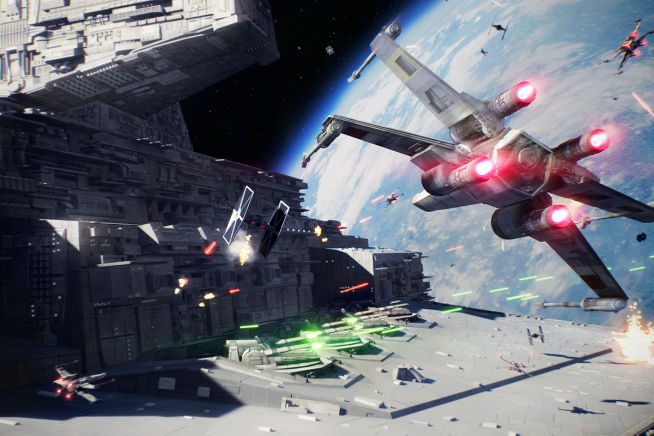 Worse was to come, Visceral was closed, Amy Hennig left EA and Uncharted Star Wars pivoted to an open world game, but don’t worry Respawn are working on a new game!

Star Wars video games at the moment are a mess, or more specifically the ones from EA. It was a strong start. Battlefront was announced along with Uncharted Star Wars. Experienced studios allowed to have the licence and create games (DICE/Visceral/Respawn). Leading industry female figures were hired. They did everything right, and now 5 yrs on and only two games released, it’s a shambles.

To become this bad needs multiple causes. The cost of games, is always a reason, and there can be no denying that making games costs a lot of money. The graphics, sound, AI etc. all need to be amazing to immerse people. The cost of the licence which would not have been cheap, is also a contributing factor. EA as a business needs to recoup their investment, and make money on their games, and many people aren’t against that. In addition EA have been caught by the changing dynamics of the video game industry. Battle Royale games have become popular, and games as a service are seen as being the holy grail for publishers. Coupled together with the cost of single player games and EA’s belief that linear video games are not a viable option for them anymore, has lead to lack of purpose and a flip flop of decisions being taken.

The main cause though are the executive decisions. I stated earlier that there seemed to be strong decisive leadership at EA when they first got the licence. There was a clear vision: allow established studios to make the games that they want, and get visionary people involved. Somehow in the past 4 yrs this vision, disappeared to be replaced by a hunger for money and a desire to “milk” the fans for as much as they could.

The rush to get the first Battlefront out, which lead to dropping the single player aspect of it, the microtransactions in Battlefront 2, the closing of Visceral and the pivoting of the Uncharted Star Wars to an open world game, all point to a focus on profit at all costs, rather than making great video games. What is clear, is that there is an internal conflict going on at EA, about what they should do with Star Wars, and this is being played out in public. They got a bloody nose with Battlefront scandal, from the gamers, the media, the shareholders( It cost them $3 billion in share value), and Disney themselves. We are 5 years into a 10 year deal, and only two games have been released, when we should be anticipating a fourth. EA have juggled and dropped arguably the biggest IP in the world.

Can Star wars as an IP be a success, in whatever genre the game is placed in, and withstand the pressures from other videogames? With 23 million copies sold, that yes it can.

EA now stands on a precipice to deliver a Star Wars game that pleases everybody, otherwise they might wish they had never got involved with Star Wars.

This is the opinion of the writer only and does not reflect opinions of the rest of the LGR team.