One year ago today, Nintendo gave unto us a glorious thing. They released a new console which is pretty good… but they also gave us what is quite possibly (in my humble opinion) one of, if not THE greatest video game ever made – The Legend of Zelda: Breath of the Wild.

A bold claim, you might say. Well allow me to make my case…

The Legend of Zelda series has always held a special place in my heart, and unquestionably has been hugely influential on the video game industry as a whole in the 32 years since the original game was released. The Legend of Zelda, and Zelda II: The Adventure of Link paved the way for what would become the action RPG genre, as well as forging the way for non-linear open world games. Just over a decade later Nintendo changed the playing field again and redefined what an open world action RPG could be in a 3D setting with the release of The Legend of Zelda: Ocarina of Time. Despite coming from the early days of 3D gaming, Ocarina has stood the test of time and is widely regarded as (up until this point at least) the pinnacle of the Zelda series, and remains a huge influence of other developers. Capcom used the Ocarina framework to create the best non-Zelda, Zelda game in Ōkami, and the formula was given a gritty, adult sheen by Vigil Games in the critically acclaimed but criminally underselling Darksiders series. Another series very close to my heart, The Legacy of Kain, wears its Zelda influence openly, with the original 2D Zelda games forming the basis for Blood Omen, and Soul Reaver obviously cribbing from Ocarina.

That tried and tested formula that formed the basis for almost every Zelda game didn’t undergo much change over the years. Link wakes up, something unforeseen happens, Link goes on an adventure in a more-or-less non-linear way, completes various dungeons and acquires more tools to help him on his way. There have been tweaks over the years – the time constraints in Majora’s Mask and the ability to merge into the walls in A Link Between Worlds are two such examples – but largely Nintendo didn’t stray too far from a design ethic that had worked for more than a quarter of a century.

That changed with Breath of the Wild.

Breath of the Wild is at one and the same time a love letter to the origins of the series, and a complete break with the familiar framework within which it had thrived. Yes, the game starts with Link waking up, yes he must defeat Ganon again, and yes there are dungeons to be explored and beaten. But outside of those conventions the game created something new, something built on the foundations the series had laid 30 years before, something that looked to the west for inspiration and decided to do better. For years, developers of open world games had said something along the lines of “See that mountain over there? You can actually go there!” only for players of the final product to only bump up against it because the game wasn’t designed with mountain climbing in mind. True exploration was hindered at every turn by invisible walls and insurmountable obstacles. Breath of the Wild actually lets you explore the world, completely, from top to bottom, from every cavern to the peak of every mountain, it is the first truly open world game. 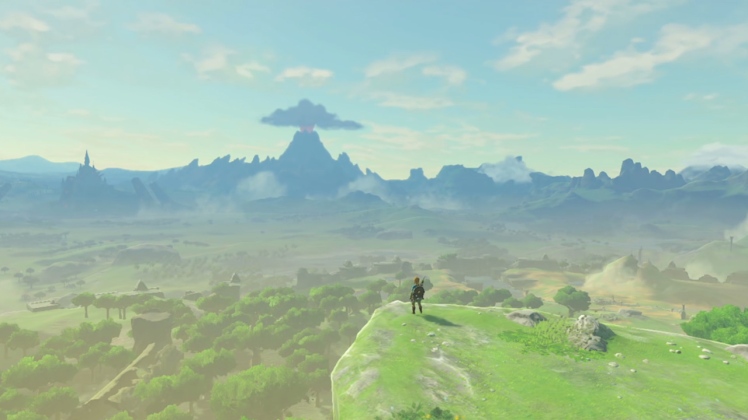 From the moment Link emerges from the Shrine of Resurrection to the moment Ganon is finally defeated and peace is returned to Hyrule, the sense of childlike wonder and the joy of discovery never ceases. Rather than copying the Ubisoft open world model of filling your map with icons and points of interest, the map in Breath of the Wild marks the topography of the world, and any shrines, towers, or dungeons you have completed. Everything else in the world has be discovered yourself, spotted perhaps from the top of a tower, and travelled to without guidance. Exploration is a joy in itself, and I rarely came away from traversing some distant corner of the map without having discovered something wonderful.

Rather than a lengthy and hand-holding tutorial, something which had become disappointingly regular in the Zelda series, Breath of the Wild gently guides you for the first 30-60 minutes, which is spent on the relatively sedate and serene Great Plateau, quietly ushering you towards discovering how the world works before letting you loose in Hyrule. And let you loose it does – when you leave the opening area you have one objective, “defeat Ganon”, and that is it. You are advised in a direction you can go to begin your adventure, but whether you follow that advice or not is completely up to you. You can go straight to Hyrule Castle and take on Ganon (much appreciated by speedrunners), or you can, like me, spend the next 100-odd hours in the most beautiful and full realised open world ever created. 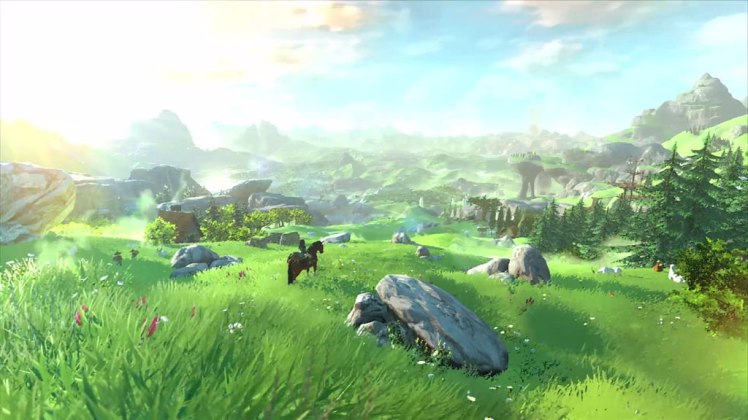 And the game lives up to the word “world”. Many other open world games may focus on a specific area (the frozen wastes of Skyrim or the SoCal facsimile of San Andreas), but the Hyrule of Breath of the Wild feels like a complete world with distinct biomes that feature drastically different climates, flora and fauna, and environmental challenges. The perpetual rain of Zora’s Domain removes your ability to climb your way over obstacles, and the punishing heat and expanse of the Gerudo Desert requires a completely different approach to the frozen mountains of the Hebra region.

These distinct areas force you to experiment with new ways to prepare, survive and traverse. And experimentation forms the basis for much of the gameplay too. Breath of the Wild features perhaps the most robust physics engine since Half Life 2, and paired with the fact that weapons and shields have a finite durability and can be scarce to find, new ways to overcome combat encounters are actively encouraged. And what a set of tools you have to experiment with – magnetically lifting metal boxes and dropping them on to enemies; rolling a boulder down upon a cluster of sleeping Bokoblins; setting fire to the grass in a field and using the updraft to carry you up to launch an aerial attack. Playing with physics is also used, not only to complete the shrine puzzles as I’m sure they were intended, but to break the puzzles and find new and interesting (and often hilarious) ways to overcome the challenges.

For months following the release of Breath of the Wild the internet was full of daily stories and videos detailing some new secret that had been found, or some new hilarious way to use the physics engine. The first time I saw that you could cut down a tree, use stasis on the log to lock it in place, hit it to transfer energy, then climb on board and surf it through the sky, it blew my mind. I could talk about the sparse but genuinely moving story, the genius of the dungeon and shrine designs, the intricate (but never overwhelming) crafting and survival mechanics, but the thing that has continued to strike me is that childlike sense of wonder found in exploring the world of Hyrule.

Many games have touched me over the years. Stories in some have brought me to tears, questions raised in others have kept me up for nights on end, and I have lost myself in countless open worlds. But no game has stuck with me like Breath of the Wild. It is not the game that has made me think the most, or emotionally resonated with me the most, or even the game I have played the most in the last year. But Breath of the Wild has never failed to bring me joy every time I have booted it up and stepped foot back into the wondrous world of Hyrule.

Nintendo raised the bar, not only for themselves, but for every other developer out there. I doubt any will ever achieve quite the majesty that Nintendo have with Breath of the Wild, and for that reason I believe it is the greatest video game ever made.