I never got pulled into the Candy Crush hype when it first arrived on the scene. As far as I was concerned the genre peaked with Bejeweled, especially the Bejewelled Blitz variant.

So why did I end up playing Toon Blast? Simple; it was an ad within another free-to-play game that had come up often enough to make me curious. The ad made it look easy. Swipe a block to make a mega chain, swipe another one to make another mega chain. Swipe the resulting colour balls into each other to clear the board. Easy! While I wasn’t really expecting the game to be that easy it does break you in gently. Each level has a goal to clear a number of blocks/balloons/lights/clear blocks/crates/gummy blocks that grow/get ducks to the bottom/make carrots appear out of magic hats* (*delete where appropriate). You are given a set number of moves for each level to attain the goal, but if you fail you will lose a life (of which you have 3, but these regenerate over time) and you must retry the level.

All well and good, but over the 80 odd levels I played it just felt like the challenges were getting increasingly harder (even with using the bonus items available to me) and that the random number generator was never on my side. By level 80 it felt like I’d seen every mechanic the game had to offer, and without an end game progress just seems inevitably pointless.

The trailer for Tap Titans 2 is great. It lures you in with the promise of a cool tap based battles, customisation and RPG elements. In its defence it does deliver on these. Sort of. 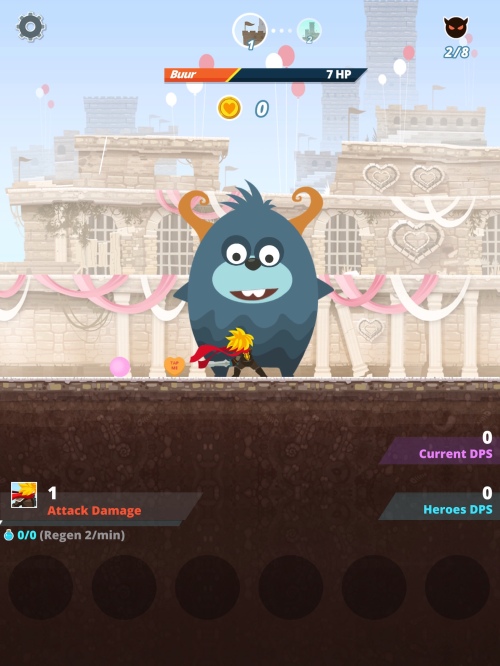 To start with the game is very nice looking with a lot going on on-screen at any one time. The characters and enemies are all well drawn and animated, with the design of them also making each one feel different and unique. The music and sound effects are also good and fit the game well. The menus are easy to use and navigate, but may not suit anything smaller than a 6” tablet. The ads are optional to watch for bonuses, and there is some community interaction as you can join a clan and work towards a joint score/boss battles.

For the RPG elements there is levelling up the main character and teammates, there’s choosing which abilities to level up, there’s collecting artifacts and boosting them, and there’s a selection of pets that have varying abilities to aid you. The customisation options allow you to discover and swap a variety of clothes and weapons that boost your stats.

Sadly, underlying this all, is just another button pressing/tapping game. You can achieve the same effect of seeing numbers increasing by typing 2 X 2 into a calculator and continually pressing the equals button and watching the total number increase on the display. 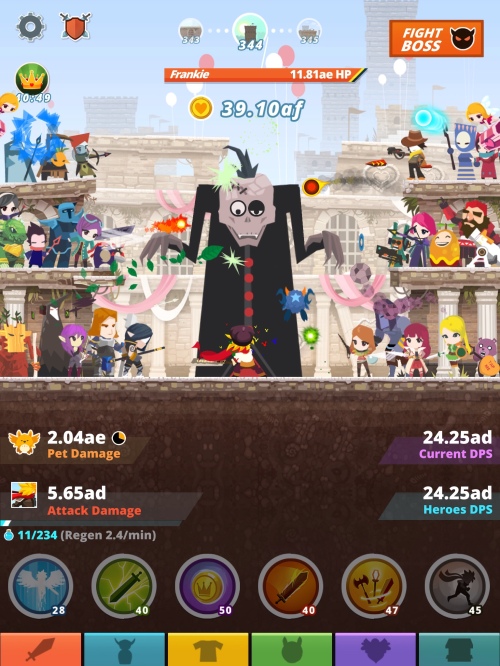 Despite myself though I have now spent far too long playing Tap Titans 2. I understand the game play loop, I can see the Pavlovian response it illicits from me, and I wouldn’t recommend it to anyone, but I’m still playing it. In the words of Radiohead on their song Just: