“Well some of the crowd are on on the pitch. They think it’s all over! Well it is now!”

Retro Soccer immediately played on my nostalgia emotions by having a loading screen border like Spectrum 48k games when it is starting up and in game it looks like a cross between Kick Off and Sensible Soccer. Sadly any goodwill I had towards the game was a little shortlived as the game itself does not stand up well to those lofty comparisons.

To all intents and purposes Retro Soccer is a proper football game on a mobile device which definitely goes in its favour. You get to play a full match and control different members of your team. You can pass, tackle and take wild halfway line shots. It even includes card packs that include new players with which to put together a better team (free card pack every 3 hours or paid for via in game currency). So far so good. 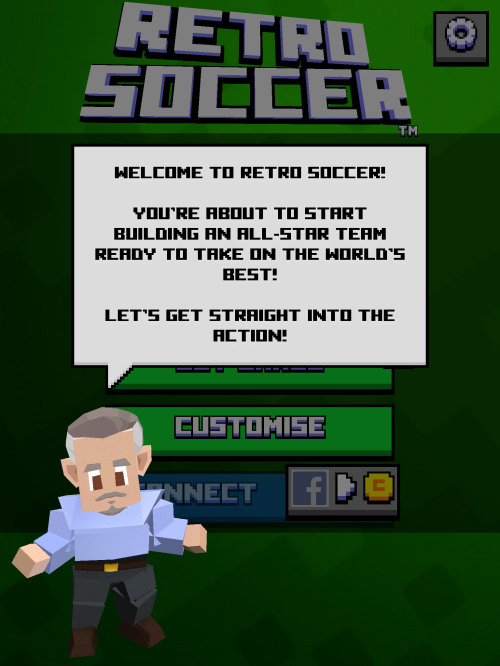 So what lets the game down? Two things. The first is that the game has a numbered level progression path and each new level has three star challenges. You need to get 25 stars over the first 15 levels before you can progress to the next set of levels. So no proper league system or even cup tournament. The second thing that lets the game down is the controls. On screen gamepads are the bane of many mobile gamers as they are never as precise as a physical joypad. Retro Soccer eschews even an on screen gamepad in favour of a touch control system that sees you tap empty space on the pitch to dribble, tapping on a team-mate to pass to them, and swiping to play a long ball or a shot (tackles are also made by swiping in the direction of the opposition player with ball). These touch controls felt even more imprecise than an on screen gamepad and I found them awkward to get used to, sadly.

Score Hero feels similar to some of the other football games reviewed here like Tiny Striker and Flick Kick, but tries to look and feel like a current generation game eg. FIFA 17. The game puts you into a variety of match scenarios that see you passing, shooting or heading the ball. To do this you swipe the screen to enact your choice of kick and placement. If you complete the scenario you get a nice replay of your match highlights. Get a shot or pass wrong by having it blocked or saved by the opposition team and you are given a chance for a rewind using the in-game currency. If you decide not to rewind you have you to replay the whole scenario again. 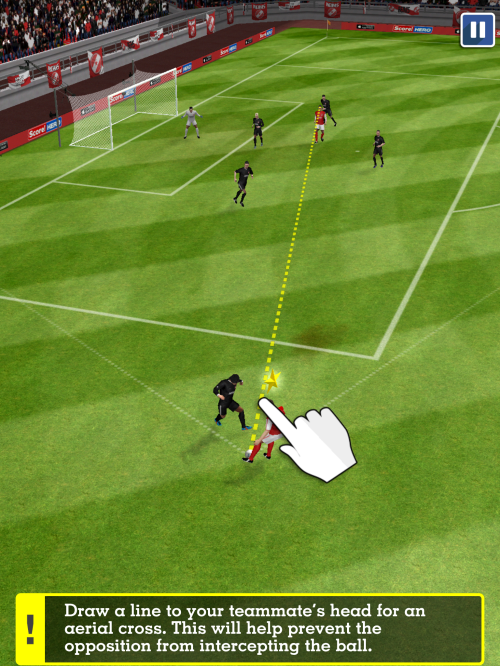 As you get deeper into the game your choices of play style expand as you are able to decide which of your own players you pass the ball to and so provide space for the team to move. Ultimately the goal of each level is to complete the scenario these options make it feel less on rails than the initial gameplay would make you think. 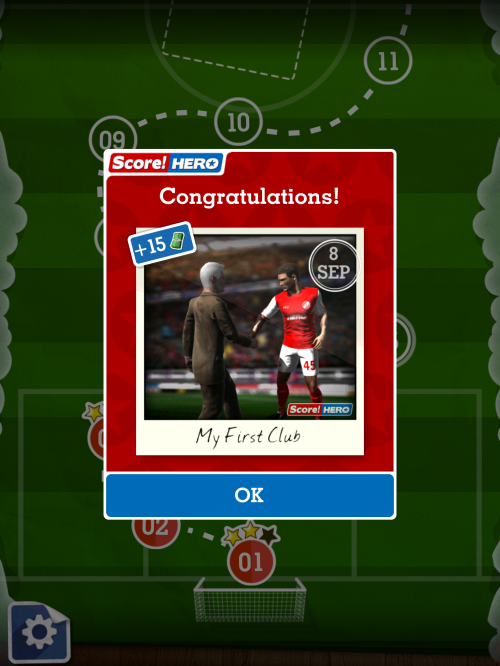 Overall the style and look of the game is impressive with the graphics combined with mocked up magazine covers and tabloid style headlines to make for a very attractive package. The depth of play surprised me after the initial stage, but the game does get repetitive when having to redo levels as the small amount of in-game currency for rewinds does not last long, and the game is not eager to give you more unless you pay for them. 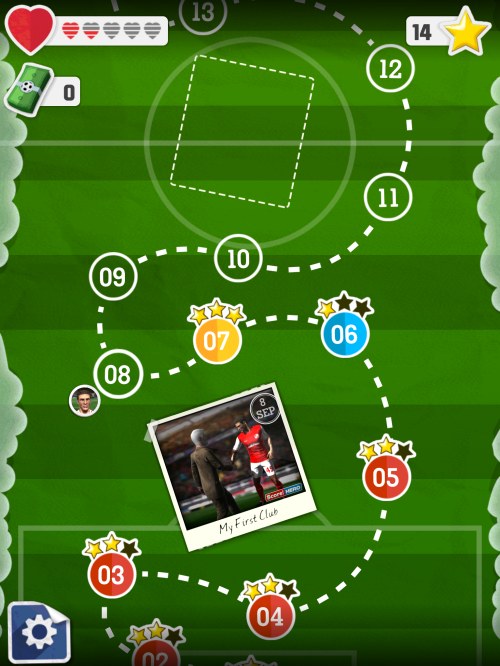 As a Tiny Striker it is up to you to score as many goals as you can in the condensed 90mins allotted to you and keep the Lose-Draw-Win meter in the Win section until the timer runs out. So pick your first team to play as and win the league for them! That maybe over-simplifies the mechanics in Tiny Striker as there is the goal keeper and defenders to contend with as well as a variety of weather conditions.

To aid you in you in scoring you can curl the ball with a curved swipe and even gain bonuses through the purchase of boot cards, match cards and team cards using the in game currency. As you progress through the season you also gain experience and levels which allows you access to higher powered cards, and you can train both your power and curling abilities to enhance your overall skills. Sponsorship also plays a part in your skill bonuses as better sponsors give better stat boosts and coin collection returns. Coins can be collected by hitting them with the ball during the match and at the end of the match you have the option of doubling your coins by watching an ad. Another way to gain coins is to complete sponsorship tasks during some matches. This involves doing 3 things during a match eg. curling the ball and scoring, scoring by deflection off a defender, or scoring 3 goals in a row.

The game is just the right side of pick up and play, as well as being fun enough to make you want to come back for more. I managed to get my team promoted in the first year (playing for Doncaster), but as your team’s rating doesn’t increase with promotion I found the jump to the next league made the game significantly harder and so decided to transfer down a league to allow for more training. Zlatan Legends is a very tongue in cheek game with regards to the story. A universal ruler is holding a tournament and has demanded that his underlings gather together the greatest athletes from all the universes in time and space. Weirdly all these athletes are Zlatan with you playing as the Zlatan from Earth.

It is also an oddity on this list as it is barely a football game, but rather a new sport called “driftball” were the aim of the game is to get your ball to the end of the course before your opponents. A racing game in essence. You move the ball along the course by choosing the strength and direction of kick that means you miss colliding with blue walls, get good bounces of yellow walls, and hit speed pads that keep your ball travelling further. There are 6 “tracks” on each planet to beat before you can go head-to-head with that planet’s Zlatan, and then you have the option of beating the Pro tracks for that planet. Planets unlock as you level up and currently there are 8 planets available. 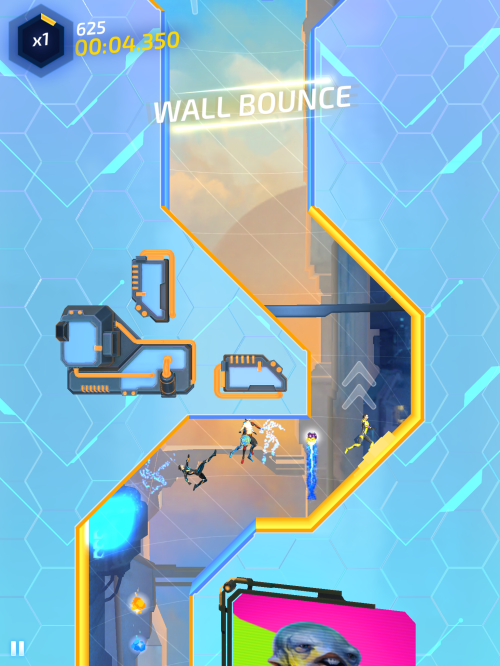 The game plays well and seems to be fairly generous with giving in game currencies (coins and crystals) as rewards. You also win loot boxes that contain cosmetic items for you to customize your Zlatan. Whether you play this or not may well come down to your football allegiances and the fact that Zlatan now plays for Manchester United.