Touchdowners is to American Football what foosball is to regular football. It is a simple distillation of the game made more so by having just 3 members of a team, all of which can play defensively or offensively depending on which end of the pitch they find themselves.

Players are all controlled by pushing either the left button or the right to make them move and swing their arms in that direction. Should one of your players catch the ball you can then use the throw button to launch the ball in the direction your player’s arms are swinging. On first play the game feels like it depends on luck more than skill, but the more you play the more you realise that it is possible to pull off some well timed throws…sometimes.

The three modes available are career, arcade and 2 player. Career sees you taking control of a team and playing against other teams in a knockout to win one of three cups. The games are a first to three points affair apart from the final which is to five points. Thankfully getting beaten doesn’t reset your progress and you can try again straight away. Each game won earns you coins which you can use to unlock other teams. The arcade mode is a first to score survival mode that counts the number of games in your streak so that you are always trying to beat your own score.

The 2 player mode works reasonably well with touch screen controls for each team. Obviously the bigger the screen the easier this makes it, but even on a phone screen it still plays well.

I would describe Cubiques as a pathfinder puzzle game. The aim of the game is to get from the start point to the finish and clear all the white tiles from the board in the process. You move the red cube by swiping in the direction you want it to travel.

The game gives you an isometric viewpoint of each level so as to allow you to see as much as possible at any one time, and while the graphics could be viewed as minimalist they don’t feel harsh in a clinical way. To balance the simple visuals the game has a wonderful tune as background music that I have found myself humming when not playing the game. That’s always a good sign of a well written musical piece.

So far there are 70 levels to navigate through with the difficulty and size of each level increasing steadily as opposed to have a high difficulty spike.

An excellent puzzle game to keep you entertained.

You are left alone in a room while your colleague nips out for a few minutes. In front of you is a desk with a red button on it. I did as I was told and didn’t touch anything. My colleague came back and said thanks for watching the office. On my second play I was a bit naughty and tidied up some of the paper balls that were lying around. My colleague thanked me when he came back. I like being helpful.

The 3D version is a good looking graphical upgrade on the original. It seems quite expensive for a waiting simulator, but if you like that sort of thing this is definitely for you.

Out of curiousity I checked out some other reviews for the game. They mentioned really weird things like pentagrams, robots, the Illuminati, using a hammer to break things, a screwdriver to open things, black light messages, and even some gerbils. I didn’t see anything like that. Maybe they were rebellious and didn’t do as they were told. “Alright, but apart from the sanitation, medicine, education, wine, public order, irrigation, roads, the fresh water system and public health, what have the Romans ever done for us?”

Aqueducts is a new game based on the classic Pipe Mania and is still in a beta phase of testing. The game has you turning parts of an aqueduct to direct the flow of water from one side of the map to the other. The 7 so far released stages have between 5 and 8 levels each with the last level in each stage being the final destination of the water flowing through the aqueduct. 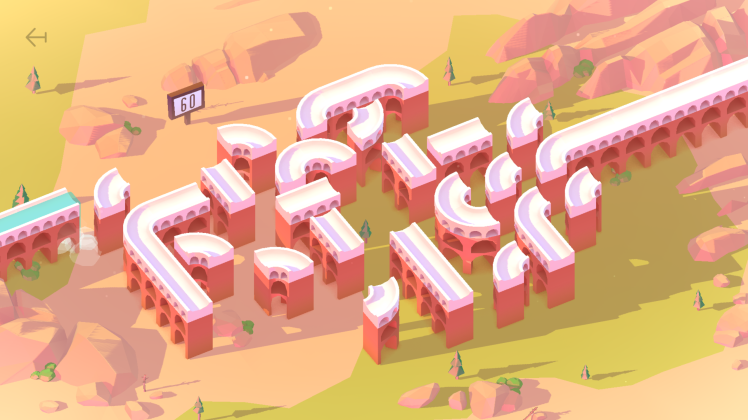 The levels so far have been one of two types; you either have a number of moves to complete the level in, or there is a reservoir meter that depletes over time. When you finish each level you are graded out of a maximum of 3 stars. Getting 3 stars in most levels has so far been reasonably easy with a few retries, but some have so far eluded me and I just can’t see how to complete those levels quicker or with less moves.

“I think it was ‘Blessed are the cheesemakers’.”

Visually the game takes influences from Monument Valley with an isometric view of the puzzle and a relaxing pastel-like colour scheme. On the stage maps the developers have added in geographical features to make each area different. The music, while nothing special, does it’s job of creating a calm ambience well.

As the game is currently in an open beta access phase the first 3 stages are free to play. You can then choose to pay what you want to open up the other 4 stages from a minimum of £0.50