Hello dear reader. By now I’m sure you will have listened to our two GOTY 2016 episodes and no doubt you are dying to learn what games didn’t quite make my top 5. Well you are in luck! Here are my top games played in 2016, from 10 to 6.

The culmination of everything Platinum games have learned making character action games, Bayonetta 2 is simply the tightest (fnarr fnarr), smoothest (ooh matron!), best playing example of the genre. As I have said many times on the Podcast, I am terrible at character action games, despite loving them, so I have no shame in admitting I played the game on easy. Despite this, certain sections proved a significant challenge for me, but the core loop of dodging enemy attacks at the last second to engage “witch time” before unleashing a flurry of incredibly stylish yet totally over the top attacks on the hapless enemies formed the core of incredibly addictive gameplay. I couldn’t tell you what the hell was going on in the storyline, and I didn’t care, I just embraced the insanity and had a whale of a time. 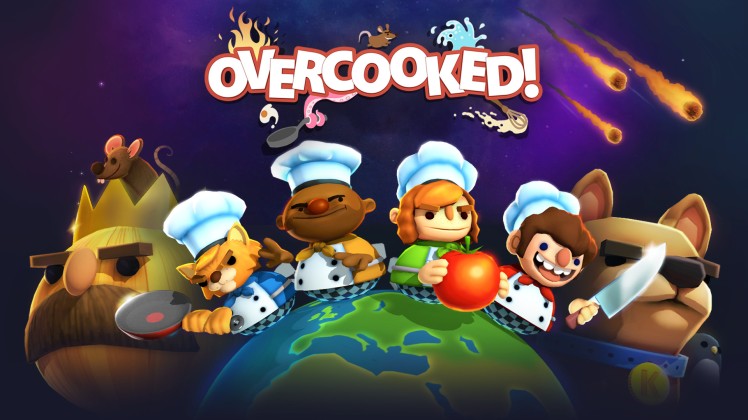 The premise of Overcooked, Ghost Town Games and Team 17’s couch co-op masterpiece, is as silly as the gameplay. Following the arrival of “The Beast” (a giant mass of spaghetti and meatballs), and your inability to sate its hunger, the Onion King sends you back to 1993 to learn to be a better chef in order to come back and save the world. What follows is a series of levels where you and up to 3 team-mates have to complete orders (soups, pizzas, burgers, burritos etc.) by grabbing ingredients, chopping them, cooking them (taking care not to burn the kitchen down), serving them before the time limit runs out, and washing up dirty dishes. The twist is that while up to 4 people are running around the kitchen yelling instructions at each other, the levels twist and turn around you in increasingly fiendish ways. Ingredients may move around on a conveyor belt so you need to grab them before they disappear, parts of the kitchen may be floating around on islands in a sea of lava, or the kitchen may be split between two lorries travelling along a road, which keep separating and rejoining. Playing alone isn’t recommended, playing with 2 people is a blast, playing with 4 looks like utter chaos, in the best possible sense. Simply the most fun I had playing couch co-op in 2016.

In 2011 Eidos Montreal released a reboot/prequel to the original Deus Ex, entitled Human Revolution, and it remains one of my favourite games from that entire console generation. The combination of well-designed stealth gameplay, with RPG mechanics, dense hub worlds to explore, and an engaging, if occasionally confusing, story made for an incredibly memorable adventure. In making a sequel there wasn’t much that Eidos Montreal needed to change, and thankfully they haven’t. Adam Jensen still has the same abilities, augmented (no pun intended) with new ones to expand gameplay options, there are still a multitude of ways to accomplish your objectives, and the social commentary from the last title has been ramped up. The new hub-world of Prague does have the same striking visual style as Detroit and Hengsha from Human Revolution, but Prague is beautiful in its own way. Neon lights, giant digital advertising boards, and security cameras cover the classic architecture, as the old world slowly gives way to the new. Prague is also even more dense than either of the hubs in Human Revolution, with a myriad of secrets hidden away for those willing to explore. At times the social commentary is a little too on-the-nose, the story is still confusing at times, and lacks a satisfying conclusion, but overall Mankind Divided is a terrific sequel to Human Revolution, and a game I will continue to return to.

Change the setting, take away all the toys you were used to using, remove the all-seeing commander, and Battlefield should be a totally different beast. And while coming from Battlefield 4’s modern combat setting to the blood and mud of World War 1 is at first a massive change, and one that takes some getting used to, Battlefield is still Battlefield. The ultimate team game where up to 64 players do battle across the fields and forests of France, the mountains of the Alps, and the deserts of the Middle East, vying to capture and hold control points in Conquest, engaging in the push and pull of Rush, or any number of classic Battlefield matches. The big new addition to multiplayer, Operations, adds a new twist to Rush, and places two opposing sides in recreations of real battles from World War 1, with a voiceover providing historical context during loading screens. The attacking side throw themselves at the frontline while the defending side do everything to hold the line and repel the attackers, it’s a time commitment but it’s Battlefield 1 multiplayer at it’s best. The campaign, spread across a number of short “War Stories” has some unbelievable moments, and is a definite improvement on the awful CoD clone campaigns in Battlefields 3 and 4. But multiplayer is king, and if you have people to play with regularly, there isn’t really another shooter out there quite like Battlefield.

Ubisoft Massive’s MMO shooter has had a difficult life. An initial E3 reveal trailer gave way to actual gameplay footage closer to release that showed a significant downgrade. A positive release was soon followed by widespread criticism of an unfair end game, a problem only made worse by the initial burst of free DLC and updates. Exploits found in the game gave unscrupulous players a massive advantage over others in the Dark Zone (the game’s only PvP area, and, when it works, the most fun area in the game), problems that Massive were very slow to fix. In response the paid DLC included in the season pass was delayed, and a patch in the Autumn of 2016 completely fixed almost every single problem in the game. Loot became more generous, cheaters no longer had an advantage, and players were given a reason to explore the open world once again. Mid-apocalypse New York is an incredible setting for a game, although the story told within the game is fairly forgettable. The gameplay is where this game shines – tight, cover-based 3rd person shooting with a heavy emphasis on teamwork and an aggressive and intelligent AI to work against. The first two pieces of paid DLC have been excellent too, Underground pitted you and your team-mates against a variety of enemies in procedurally generated “dungeons” in the tunnels of the New York Metro system, where Survival strips you of all your gear and makes you survive a blizzard in Manhattan, looking for warmth, clothing, weapons, and medicine in order to stay alive long enough to get to the exit. It’s pure survival that turns the way your play the game completely on its head. After a rocky start, The Division is back on solid ground, and I have high hopes for where the game will go in the future.