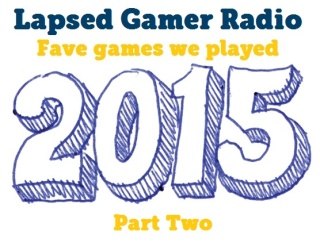 The wait is now over…
Hello and welcome to the second instalment of our own Lapsed style “Games Of The Year 2015” show.

Originally recorded in December 2015, this is where we reveal what’s floated the boats of Lee, Mark, Andy and Cev the most when we discuss the five favourite games we’ve each played this year (irrespective of actual game release date).

How many actual new in 2015 titles made the cut? How accurately did you guess what we’d pick?

We still have a plenty of FREE Steam game codes to give away and the doc can be found at
https://drive.google.com/open?id=1HTHbVerYJ2PF1gTcDMmBL24HeuIrN67896Ncn3R_1l4 – Just stick your twitter name or email next to the game(s) you would like and we’ll issue you with the code to redeem.

This episode was created by the Lapsed Gamer Radio Team. Edited by Cev.

The music selections used in the show are:

The Swapper: Theme, Intro and The Cave by Carlos Castellano

Dragon Age Origins: I Am The One & Main Titles by Inon Zur

Brothers – A Tale Of Two Sons by Gustaf Grefbergs

Where Is It Going? by Orbital

Professor Layton & The Diabolical Box: Dignity Of A Castle by Tomohito Nishiura

The Witcher 3: Eridin, King Of The Hunt, After The Storm, Witch Hunters

You can stream or directly download our episodes via our Podbean homepage: http://lapsedgamerradio.podbean.com/ and if you’re enjoying our content, please subscribe to Lapsed Gamer Radio on iTunes. All reviews are most welcome and appreciated in order to allow our little community to thrive.